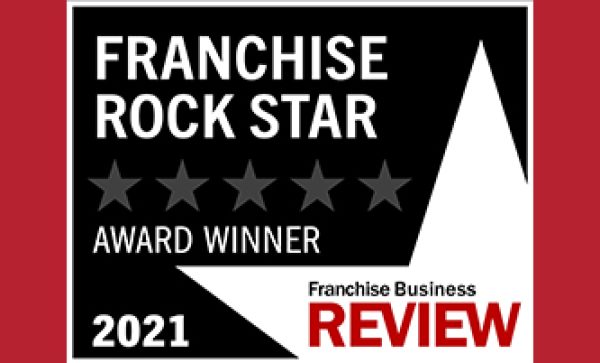 The Franchise Rock Stars recognized were nominated by their franchise brand leadership in one of eight categories as franchisees who set admirable examples when it comes to leadership, business acumen, financial and professional success, and contributing to their community. Categories included: Giving Back, Women, Millennials, Veterans, Family-Owned, “Freshmen”, Top-Performers, and Multi-Unit Owners.

“There are so many success stories out there and thousands of inspiring franchise owners who are living their dreams of business ownership that it was incredibly difficult to narrow down the list,” said Eric Stites, CEO of Franchise Business Review. “In the end, we chose individuals who are exceptional examples of achieving success through the franchise model and exemplify a strong work ethic and a real commitment to their business and community. The franchise owners on this year’s list have shown that with hard work, perseverance and the support of a strong franchise system, anyone can find success, no matter their background or previous experience. We are thrilled to recognize these individuals as Franchise Rock Stars.”

In 2020 and early 2021 alone, the Pratt’s added two new restaurants and re-opened a previously closed restaurant. Additionally, they added arcades to their new properties to bolster growth.

The Pratt’s were leaders within the Pizza Ranch system in several other ways. Specifically, they leaned-in with their marketing efforts, leading the way with consistent digital / social media campaigns and marketing their Pizza Ranch restaurants and their Pizza Ranch FunZone Arcades with best-in-class messaging.

Brandon Pratt also served as a key leader on our Franchise Advisory Council, providing insights and direction during a difficult year. And to augment his leadership role, Brandon agreed to test new products in his restaurants along with testing our breakfast buffet, thus pioneering the way for our franchise community.

While battling the impact of the pandemic and summer storms, the Pratt’s did not lose sight of philanthropy and making a positive impact on their communities. Brandon is a leader in the Hawkeye Chapter of the 100+ Men Who Care organization, a non-profit established to shed light on the lost potential in youth ages 10-15. From hosting Community Impact Night fundraisers in their restaurants, to supporting youth in their communities, to supporting front-line essential workers, the Pratt’s made (and continue to make) a real impact on real people.

According to Adrie Groeneweg, President of Pizza Ranch, “Brandon and Jennifer, overcame adversity, grew their business, provided insightful leadership, created best-in-class marketing, and ultimately made a positive impact in the communities they serve. Without question, the Pratt’s are deserving of the FBR Franchise Rock Star Award.”

This information is not intended as an offer to sell or the solicitation of an offer to buy a franchise. It is for information purposes only. The offering is by prospectus only. Currently, the following states regulate the offer and sale of franchises: California, Hawaii, Illinois, Indiana, Maryland, Michigan, Minnesota (File No. F-4953), New York, North Dakota, Oregon, Rhode Island, South Dakota, Virginia, Washington and Wisconsin. If you are a resident of or want to locate a franchise in one of these states, we will not offer you a franchise unless and until we have complied with applicable pre-sale registration and disclosure requirements in your state. New York State Disclaimer: This advertisement is not an offering. An offering can only be made by prospectus filed first with the Department of Law of the State of New York. Such filing does not constitute approval by the Department of Law. CALIFORNIA DISCLAIMER: THESE FRANCHISES HAVE BEEN REGISTERED UNDER THE FRANCHISE INVESTMENT LAW OF THE STATE OF CALIFORNIA. SUCH REGISTRATION DOES NOT CONSTITUTE APPROVAL, RECOMMENDATION OR ENDORSEMENT BY THE COMMISSIONER OF CORPORATIONS NOR A FINDING BY THE COMMISSIONER THAT THE INFORMATION PROVIDED HEREIN IS TRUE, COMPLETE AND NOT MISLEADING.
© 2023 Pizza Ranch, Inc