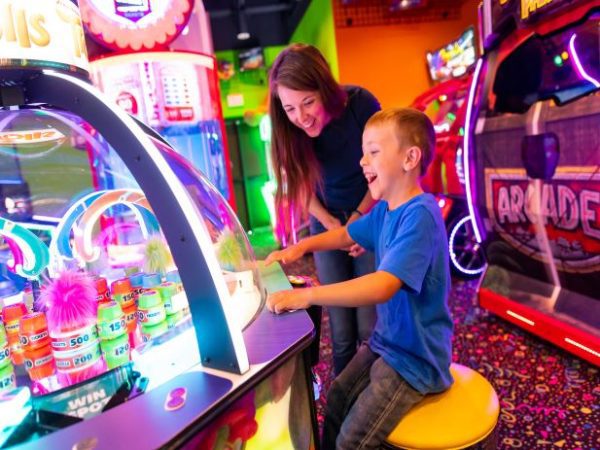 Pizza Ranch is upgrading its locations with FunZone Arcade to provide its own version of an “eater-tainment” experience for customers.

Mike Christiansen, who owns the Grand Forks location as well as nine other locations throughout the region, said the arcades are meant to bring a new layer to the dining experience at Pizza Ranch, one of the largest restaurant chains in the Midwest. is one.

The Grand Forks location opened its own Funzone in October 2021. It was the first to open in North Dakota, with Fargo following suit in December.

Christiansen said FunZone has done well and brought in revenue since its opening. Particularly popular are the five party rooms, often used for children’s birthday parties.

“The arcade has been great,” Christiansen said. “If you go there on the weekend when you have pizza and entertainment, it just goes together.”

Christiansen hopes the addition of these arcades will drive more people to Pizza Ranch locations—not just families with kids.

“We always had birthday parties,” Christiansen said. “Okay, now we have more party rooms. If you have an office party and you want to do some kind of team-building event, or we’ve even had a (rehearsal dinner). … at the time we thought That it’s big, but you have to remember, it was a little bit risky.”

The Funzone Arcade in Grand Forks has about 40 games, 70% of which Christiansen said are redemption games; Players earn rewards, usually tickets, in proportion to their score in the game they play. Tickets can usually be redeemed for prizes. The rest of the games include video games and claw crane games, skee ball, and more.

“It’s crazy,” Christiansen said. “We actually have people, in the middle of that game, just take off the headset and say, ‘I can’t do this anymore.’ It’s quite unbelievable.”

Coming later is a new racing simulator called Asphalt 9: Legends. Christianson said the Pizza Ranch FunZone Arcade will be the first arcade in the Midwest to do so.

“You feel the wind and the seat move,” Christiansen said. “I wouldn’t call it a virtual game, but it’s definitely a simulator, for sure.”

Christianson likened the Pizza Ranch renaissance to gas station chains, which now include full meals, drugstores, and much more for sale indoors.

“I feel like Pizza Ranch added this,” Christiansen said. “It just makes it a destination spot. It adds a little bit more to that dining experience.”

This information is not intended as an offer to sell or the solicitation of an offer to buy a franchise. It is for information purposes only. The offering is by prospectus only. Currently, the following states regulate the offer and sale of franchises: California, Hawaii, Illinois, Indiana, Maryland, Michigan, Minnesota (File No. F-4953), New York, North Dakota, Oregon, Rhode Island, South Dakota, Virginia, Washington and Wisconsin. If you are a resident of or want to locate a franchise in one of these states, we will not offer you a franchise unless and until we have complied with applicable pre-sale registration and disclosure requirements in your state. New York State Disclaimer: This advertisement is not an offering. An offering can only be made by prospectus filed first with the Department of Law of the State of New York. Such filing does not constitute approval by the Department of Law. CALIFORNIA DISCLAIMER: THESE FRANCHISES HAVE BEEN REGISTERED UNDER THE FRANCHISE INVESTMENT LAW OF THE STATE OF CALIFORNIA. SUCH REGISTRATION DOES NOT CONSTITUTE APPROVAL, RECOMMENDATION OR ENDORSEMENT BY THE COMMISSIONER OF CORPORATIONS NOR A FINDING BY THE COMMISSIONER THAT THE INFORMATION PROVIDED HEREIN IS TRUE, COMPLETE AND NOT MISLEADING.
© 2023 Pizza Ranch, Inc