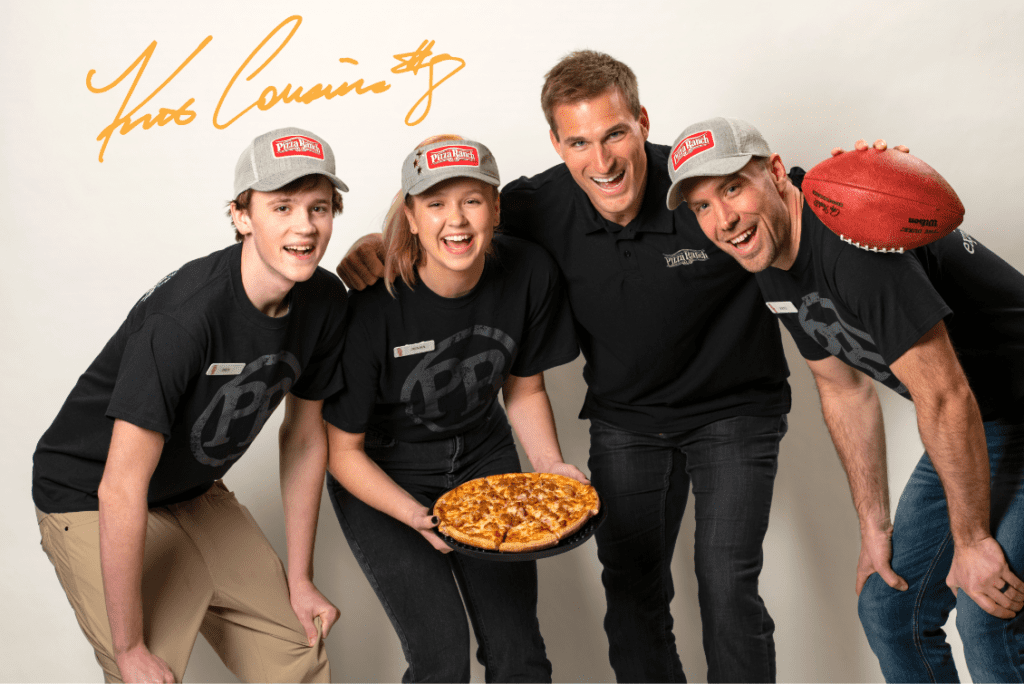 Did Kirk Cousins return to the Midwest to play for the Minnesota Vikings, or so he could be closer to his beloved Pizza Ranch? We can’t say for sure, but the pro football player and recently named Pizza Ranch spokesperson has been a longtime fan of the legendary buffet.

Cousins grew up dining at America’s Favorite Pizza Chain, even tweeting about his love of our award-winning franchise as a Michigan State college student back in 2012.

“For Pizza Ranch, there’s no better match in a spokesperson than a pro quarterback whose three priorities in life are faith, family, and football,” says Pizza Ranch Chief Marketing Officer Jon Moss.

The partnership deal features three broadcast TV ads starring Kirk at the Ranch, which will air during the regular NFL season, and can currently be viewed on our YouTube channel. The spots are estimated to bring more than 47 million impressions across Pizza Ranch territory.

Additional content will roll out in digital form, on social media—with a collection of posts coming from Kirk himself—and across an array of other in-restaurant and loyalty promotional pieces. It’s part of an overall larger advertising initiative that’s expected to drive traffic across Pizza Ranch’s more than 200 current franchise locations.

How will a Vikings player’s presence be perceived in Pizza Ranch locations outside of Minnesota? Likely without fumble, as the sponsorship highlights the player, not the team. It’s not unlike the Aaron Rodgers partnership with State Farm Insurance, as Moss explains it.

After all, Pizza Ranch has been a go-to, post-game destination for youth teams of all sports. It’s been a perfect match for celebration and camaraderie rather than competition since its inception. (Of course, that doesn’t mean a little friendly competition isn’t out of the question inside the franchise’s FunZone Arcades!)

Looking to grow with a brand that believes in establishing unique partnerships like this one with Kirk Cousins? Now’s the perfect time to join the Pizza Ranch franchise! We’re looking to grow our presence, both within and beyond, the 14 states with franchise locations open today. Simply complete the form below to get started, and we’ll be in touch!

This information is not intended as an offer to sell or the solicitation of an offer to buy a franchise. It is for information purposes only. The offering is by prospectus only. Currently, the following states regulate the offer and sale of franchises: California, Hawaii, Illinois, Indiana, Maryland, Michigan, Minnesota (File No. F-4953), New York, North Dakota, Oregon, Rhode Island, South Dakota, Virginia, Washington and Wisconsin. If you are a resident of or want to locate a franchise in one of these states, we will not offer you a franchise unless and until we have complied with applicable pre-sale registration and disclosure requirements in your state. New York State Disclaimer: This advertisement is not an offering. An offering can only be made by prospectus filed first with the Department of Law of the State of New York. Such filing does not constitute approval by the Department of Law. CALIFORNIA DISCLAIMER: THESE FRANCHISES HAVE BEEN REGISTERED UNDER THE FRANCHISE INVESTMENT LAW OF THE STATE OF CALIFORNIA. SUCH REGISTRATION DOES NOT CONSTITUTE APPROVAL, RECOMMENDATION OR ENDORSEMENT BY THE COMMISSIONER OF CORPORATIONS NOR A FINDING BY THE COMMISSIONER THAT THE INFORMATION PROVIDED HEREIN IS TRUE, COMPLETE AND NOT MISLEADING.
©2021 Pizza Ranch, Inc